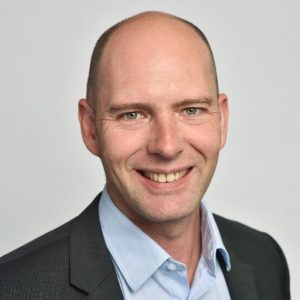 Former Master’s of Engineering Degree graduate from EFREI Paris – ESIGETEL and bearer of an ESSEC Executive Education (Management) certificate, Paul Labrogère is CEO of IRT SystemX.
Paul Labrogère started his career as a software engineer at the InfoVista start-up. He joined Alcatel-Lucent in 1998 where he successively held the positions of Team Leader R & D Software and then Director of Research, with a scientific and technological background centred on the design of distributed systems.

In 2012, he took part in creating and setting up the research institute and contributed to its development, by taking over the management of the “Technologies and Tools” research program and then of the “Autonomous Transport” program. Former member of the management committee of Bell Labs in France and of the Board of Directors of FING (New Generation Internet Foundation) and member of the Telecom SudParis Research Committee as well as the “Autonmous Vehicle France” Steering Committee (2015-2018).